By xsisted78 | January 6, 2017
Rockstar has shared the first Red Dead Redemption 2 trailer back in October and it was a complete surprise to everyone, It give us a brief look at what to expect from the upcoming and most waited game. It introduces some of the main characters, as well as showcasing amazing graphics and possibly the introduction of the steam train and I would love to drive that steam train if they let us and not make it undriveable like in the GTA 5.

At the Cowen and Company Analyst conference way back in May 2014, CEO of Red Dead Redemption Developer Take-Two, Strauss Zelnick, suggested that the Red Dead franchise is likely to get a new game in the future.

“It seems quite obvious that Red Dead is a permanent franchise,” he said, adding “the risk of just [releasing more games] is that you end up just bulking up your release schedule and that isn’t really what consumers want. Consumers want better, not more.“

Red Dead Redemption, an open-world western action-adventure game, was released in 2010, and we’ve been eagerly awaiting a new installment in the franchise since then.

“We don’t always rush to make sequels but that doesn’t mean that we won’t get back to them eventually,” the games company said. “Stay tuned for further announcements about the future of the Red Dead series.“

Why? A piece of concept art from the game was pulled from an ex-Rockstar employee’s webpage used to showcase previous work, and is dated August 17, 2015. but it can be a fake and a hoax, but reddit user KDotMatrix has a more interesting theory.

“Note the chromatic aberration on the poles and other objects in the image, a small point of contention in GTA 5. Chromatic aberration has become increasingly prevalent in modern triple-A games as of late. Here’s a screenshot that shows the effect in the PC version of GTA 5. This was also present on the PS4 and Xbox One versions of the game.

“Chromatic aberration wasn’t present in [Red Dead Redemption], as it was running on an older version of the RAGE engine. Therefore, this most likely isn’t concept art from that time period.”

Rockstar Games hinted that Red Dead 2 was very much in development with a couple of social media posts on 16 October 2016, followed by a trailer which you can watch at the end of the post.

Red Dead Redemption 2 has only been confirmed for PS4 and Xbox One consoles but there is a possibility that it will be released on PC as well.

Red Dead Redemption the first wasn’t available on PC, right now an online petition is asking for the RDR 2 to be launched on Windows. It has a total of 47 thousand signatures at the time of writing, just three thousand short of the target, so if you are one of the people who wants the game on the PC then I will suggest you head to the page and sign the petition and share this post so more people can sign it as well.

US GameStop listing page for the game says the PC version is ‘coming soon’. So there is a good chance this time this new game will be available on PC.

The message to Rockstar Games reads:

Red Dead Redemption 2 gameplay rumours and what to expect from the game.

Take-Two CEO, Strauss Zelnick, has commented on the success of the trailer saying the firm didn’t expect it to get so many views adding that the game will offer “incredible emotional depth” with “great story elements and great gameplay elements.”

“The conventional wisdom was of course that a western wouldn’t work,” Zelnick said about the first game to Gamespot. “We took a different point of view, which is that very occasionally westerns capture the imagination of the public. When we launched Red Dead, it did. And those times were right for that. And I think the times are right for a big, sprawling, optimistic view of America again–and that’s not meant to be cute.”

Red Dead Redemption 2 will have some kind of an online mode, I think they will release more details about that in the future, right now we don’t have much information about the online play. Rockstar tipster (who is quite credible) may have just given us our first hint at what to expect from Red Dead Redemption 2. The tipster, who successfully predicted two GTA Online updates, now claims that the upcoming Rockstar title will have not one but three playable main characters, in a similar style to Grand Theft Auto 5.

Tipster also claims that there will be “three playable characters of John’s former gang, and John isn’t one”. he continues to note that “the online mode will release later on, just like with GTA 5”. It would make sense, as many value multiplayer games/modes more than single-player campaigns, and would likely cause servers to crash on launch day. The success of GTA Online signifies a turning point in the GTA series and showcased a way to keep players interested for not only months, but years. So there you go, my suggestion to you is order a season pass version of the game because there will be a lot of updates coming your way, with GTA 5 Rockstar release all the updates for the online version and that is why these updates are free for GTA 5 but if they are going to offer offline updates of the RDR 2 it will be paid.

on April 2016, An image of what is claimed to be a map of Red Dead Redemption 2’s game world has appeared online. The image was originally posted on NeoGaf, but the original poster quickly removed it but it was saved and reposted all over the internet in the matter of hours. Map depicts a large area featuring the Gear Plains, home to Blackwater, where the first Red Dead game was situated. This suggests, to us at least, that the map will be much larger than the already huge maps of previous Red Dead games. as you can see there are islands as well on the map so there is a chance that you will get some sort of boats to hop around islands.

Red Dead Redemption 2 rumors also suggest that it will be a prequel to the earlier game, and the map seems to support this theory. You ask Why? Due to the lack of a railroad anywhere on the map, which played an integral part of Red Dead Redemption. It’s worth noting that there is a mention of a “railroad” in the map key, which suggests that we could be looking at an unfinished map but there are so many possibilities and we are guessing right now unless Rockstar comes forward with more information about the upcoming game.

New Bordeaux is also featured on the map, Yep this is the area that Mafia 3 is set in but it was in the future 1968 to be exact and it was a brilliant game. Mafia 3 was distributed by Rockstar’s parent company Take-Two Interactive, so there can crossovers, very good ones I am sure.

TechRadar claims that “a source close to the development of the new Red Dead game has confirmed to us that the map is indeed the real deal.” According to the site, the image is a “very recent art direction map” showcasing the different environments in the game.

RED DEAD REDEMPTION 2 Promotional Posters Are Being Delivered To Retailers

Promotional posters of the game are now making appearances at the gaming stores both in the United States and in the U.K. listing a Fall 2017 release date for Red Dead Redemption 2. The following posters were taken at a GAME shop in the U.K… 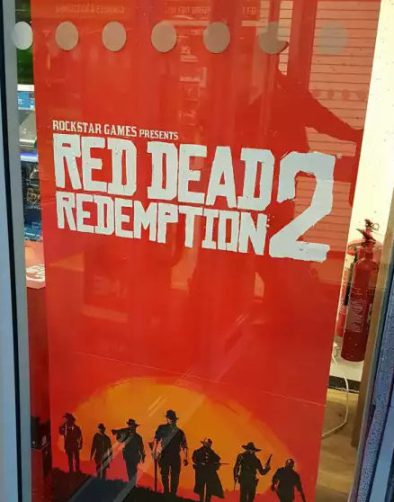 Red Dead Redemption 2 release date: Autumn 2017 and you can pre-order Red Dead 2 now via retailers such as GameStop, Amazon and GAME. Prices range from £45.99 to £59.97. Also check out the screenshots from the trailer below.